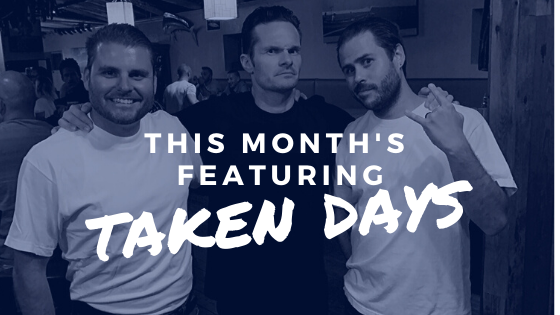 To kick off the year we’re featuring the incredible local band Taken Days. Their guitarist Brent is one of the OG’s at Gemini and was first a client in the early 2000’s.

If you’d like to be featured or you want to submit a band or an upcoming show, please email [email protected]

An Interview with Brent Waterworth of Taken Days

Name of your band?
Taken Days

What does the name mean?
I joined a year or so late but I believe it sounded cool at the time, and sounds like a band name. But we all like how it relates to TIME.  We have used an hourglass as a logo at times, and the album names have related to time/ distance.  “Nowhere Slowly” and “10 More Miles”.  Our new full length record that we are tracking now will have a title that relates to time as well.

Who’s in the group?
Current Lineup is:

The band has been a three piece since March of 2019. Our bass player Cameron moved out of state and Corey who was on guitar took over bass duties.  We’ve felt very comfortable as a three piece and decided to do this record this way and then go from there.  We also had two previous members, Tony on drums and Scott on guitar.

How’d you guys meet?
Corey and Cameron had known each other for a long time and played in projects together.  They started the band and recruited Tony and started jamming in late 2016. Later they got Scott on guitar and recorded Nowhere Slowly in 2017.  Towards the end of 2017 things didn’t work out with Scott so they posted a Craigslist ad for guitar player.  I auditioned and then officially joined the band in December of 2017.  We proceed to go and released 10 More Miles in May of 2018.  That summer Tony left the band and we posted an ad for drummer and Landon was the only audition that we needed.  All systems go from there, until Cameron left the state in March of 2019.  Now the three piece format that you see today.

What genre of music would you consider yourselves and who are your influences?
We could all agree on pop punk as a good way to describe our band.  Punk rock, Alt rock and emo influences as well.  We’ve been comparted to bands like:  Green Day, The Ataris, Blink-182, The Menzingers, MXPX, Jimmy Eat World, Alkaline Trio and Bayside.  Those bands do influence us as well as a very broad scale of punk and other types of rock and or musical genres.  As listeners I feel we have no boundaries with music.  As players and writers for this project we do stay in a comfortable lane that defines our sound and direction.  We play it well and our listeners and audiences have validated that over the years.  We push our songwriting within those boundaries to put out the highest quality songs that we can at those times.  We’re all very excited about our upcoming full length and we think the pop punk/ punk rock world will be excited to hear it as well.

What is the best advice you been given about playing music or otherwise?
Talent will only take you so far.  Be a cool person and a good person.  If people like you, then they’ll like your music and want to be around it.  This helps a lot with networking and booking.

What are you working on right now?
New Taken Days full length due out the first half of 2020

What bands are you listening to right now?
Too many to name? I really like the new Strung Out record and the new Assuming We Survive EP. Decent Criminals new full length was very good too.   That’s just some recent stuff that popped into my head.

What practice tips do you find help your band practices?
Practice your parts alone and perfect your ideas and then jam them with the band.  Stay open minded and let a song or idea breath, come to life and take its own form.  We play together for a reason, it’s fun and it’s effortless to produce good music.  There shouldn’t be more to it than that.

What are some tips for playing live gigs?
Don’t drink (too much) use drugs (too much) and don’t over think things.  It always feels and sounds different than a rehearsal so expect it to.  And bring a good show and good performance every night.  Whether there are 10 people or 1000 people, be consistently tight and passionate as a live band.

How long have you been at Gemini?
I personally started out at Gemini in the early 2000s when the studio first opened.  My band at that time benefited from our time there and it took us to another level.  I suggested that Taken Days go there in 2018 and it worked out great for us.  Really helped us write and progress as a band.

Where can we find you and listen to your music?
Taken Days Website
iTunes
Spotify
Taken Days Instagram