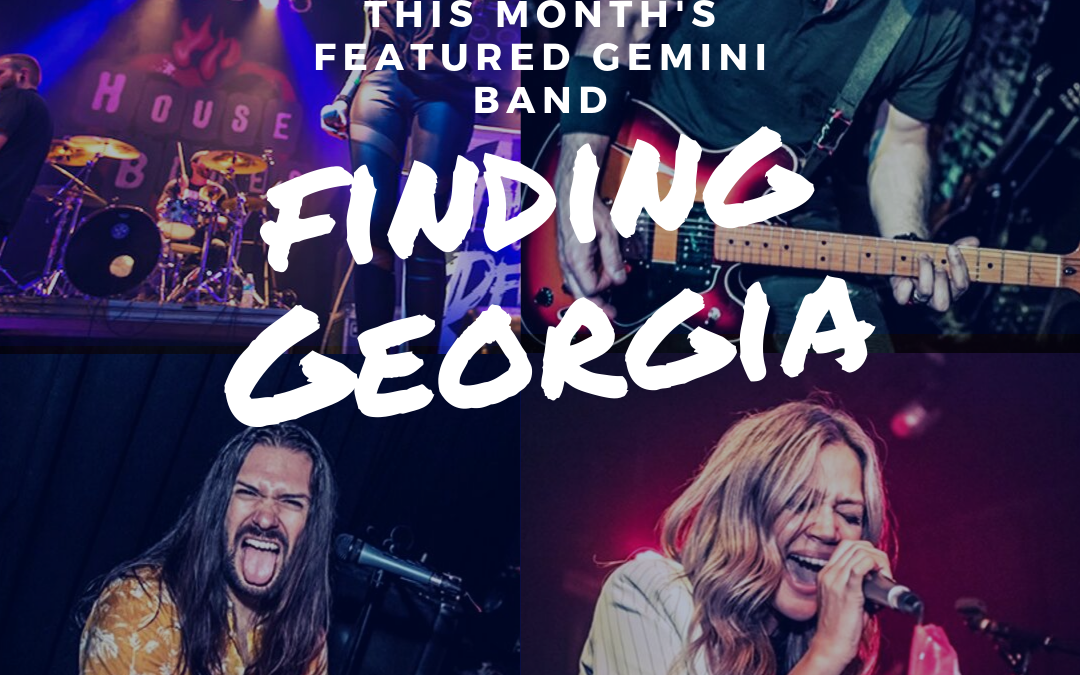 This month we’re featuring Finding Georgia, formerly Art of Decay who have been clients at Gemini for 9 months now.

Check out their first show as Finding Georgia this Wednesday September 18th at Whiskey A Go Go. Get your tickets here!

An Interview with Finding Georgia

Name of your band?
Finding Georgia, formerly Art of Decay.

What was the inspiration to change your band name from Art of Decay to Finding Georgia?
The original plan was to find new musicians and continue on as Art of Decay. Olya and I (David) were the only original members of AOD. As these new songs started taking shape, it quickly became apparent we were going in a new, exciting direction sonically. There was such a contrast between old songs and new that a name change was in the back of our minds. The final weigh in on it was Zach Odom of ZK Productions. The last day of tracking we were like “what do you guys think about changing the name?” Immediately Zach looked up and said, “Yes, change it! I didn’t know that was an option. I’m so stoked to show everyone I know these songs. Not so stoked to tell them the name of the band.” Haha. That pretty much was the deciding factor right there. We had spent two weeks with ZK, getting to know each other, writing music together, understanding where they and the band were as far as goals and identity as a band. Art of Decay  just didn’t fit us anymore.

Who’s in the group?
Our band is Vocalist Olya Plekhanova, guitarist Rob Hilburger, and drummer David D’Auria.  We are still searching for the right bassist to fit in with our vibe and our sound.  For now we have had great session players fill in for us in live gigs or in times where one is unavailable, we have the bass backtracked.  Ideally, we will find a new bassist that gels with us after we complete our upcoming studio sessions.

How’d you guys meet?
Interestingly enough, we all met through the powers of the internet.  I started the band.  Originally there was only drums and guitar, just cranking out ideas and trying to find an identity for what became Art of Decay.  Olya responded to an ad on craigslist.  We had an instrumental demo we were using to audition singers and she came in and took down the house.  She had a charisma about her when she performed that was infectious, and her vocal range and style were both impressive and fresh.  Rob found us off of Bandmix.com.  He contacted Olya after hearing our song “Let Go” on her online profile.  The timing was perfect because Olya and I had just finished tracking a new song and were on the hunt for a new guitarist.  Rob fit in seamlessly.  He’s got monster chop, great writing, and a positive attitude to boot. I remember us both looking at each other like “Finally, we have the right player!”

What genre of music would you consider yourselves and who are your influences?
Our influences range from heavy to obscure.  Meshuggah to Dave Matthews Band.  The Calling to Every Time I Die.  Thrice to Lifehouse.  You get the idea haha.

We heard you guys just recorded an album, how was the recording process?
Absolutely incredible. It was the best experience writing and recording music any of us have had. We flew out to Georgia to work with Zach Odom and Kenneth Mount of ZK Productions.  Zach and Kenneth have a way of making you feel like home and taking the stress or anxiety out of recording so you can just sit and have fun with some of your best friends. The band became closer, and we made some amazing friends and memories out there. We’ll definitely be going back

We were excited to work with ZK because of the open, natural rock sound of their records. We didn’t want drums to be sample replaced; didn’t want whatever new algorithm telling us how guitars should sound. We wanted producers with great ears and technique setting up microphones and capturing the sound at the source. Much like the records we grew up on, we wanted the emotion and feel of each of our playing styles to be captured from mic to board in a great sounding room.
We recorded 0 DI’s of guitars and bass. No reamping later, no coloring tone with tons of processing. Sounds were found and committed to.

Drums were tuned to the key of the song, and retuned as much as needed. It’s more time consuming, but for us, it’s the sound we wanted. They really brought the best out of Olya. Out of all of us, I think she might have been the most nervous to work with them. But she killed it. Her vocals sound incredible. I’m so pumped to be working with this band, they’re all so talented.

When will the new music be released?
ZK are mixing now. After mix/master, we have some things planned for the new songs. We will be playing a lot of the new songs Wednesday September 18th at The Whisky along with Smile Empty Soul and September Mourning. If you’re in the SoCal area, get yourself to Hollywood! It’s going to go off.

Don’t forget to catch Finding Georgia this Wednesday September 18th at Whiskey A Go Go. Get your tickets here!